The first missionaries to arrive in  Monymusk were the Culdees or ‘Servants  of God'. It is possible that they were the followers of St. Ninian and his  missionaries from Whithorn.

They seem to have been a loosely knit society of missionaries whose  presence was felt in various parts of Europe and who resented any conformity to  a central ecclesiastical organisation.

It is to them that the Christian life of Monymusk owes it origin, and while no trace of the mud and stone walls and thatched roofs of their cells  and church remain, their spirit, faith and courage began a mission which continues to the present day.

The Brecbannoch is the most priceless surviving relic of the Celtic  Church in Scotland. Originally it contained a bone of St. Columba, was venerated  as a sacred relic and carried before the Scots army at Bannockburn. It is  thought to date from the 7th Century and is commonly known as the Monymusk Reliquary.
Until 1933 it was kept in the House of Monymusk when it was sold to pay death duties. Its permanent home is now the Scottish Museum in  Edinburgh.

At the beginning of the 12th century, Queen Margaret of Scotland  imposed  reforms which brought the Culdees into the more organised  Roman Church of  St Andrews in Fife.
The 12 Culdees became a Prior and 11 canons of  the Augustinian Order. 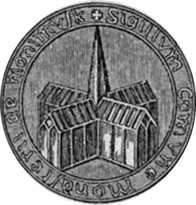 The monastery in Monymusk comprised a refectory, a dormitory, and  an oratory and had a right to burial in the parish graveyard. There was also a  school, Scollatis land, 3 gardens, a croft and pasture for 6 horses and 15 sheep.

Although little is known about the Priory during its active life there would have been little difference between the activities in Monymusk and other centres of the Order. These included canonical services,  training of novices, study of theology, limning and a school of music to sing  the service. The practice of agriculture would have been included in the  curriculum.
The tower and some parts of the present church date from this  period. Malcolm III gave a grant of land to the Cathedral of St. Andrew's (Fife) in thanksgiving for victory over his enemies in 1078, and the Romanesque style of architecture suggests that the building was completed early in the second  half of the 12th Century.
At that time the church building may have been a dual purpose place of worship: a parish Church for the inhabitants who stood in the nave and  a conventual building for the canons  who occupied the Chancel.

By the early 16th Century the Priory had lost its pristine zeal and evangelical fervour and entered into a period of decline. Quarrels split the  little community, fire gutted the Priory buildings and debt ended its existence.

In 1560, the Church in Scotland, now reformed, began a new era and  addressed itself to the task of meeting the problems of its  generation.

St Mary’s Priory church became the parish Church and continued as  the centre of Church life in the Community. Internally it was adapted to suit  reformed worship. The two arches were closed up; a new wing was added on the  North side for the laird and his family, while the pulpit was transferred to the  centre of the long South wall. A door on this South wall built later in 1660  made it easier for the minister to mount the pulpit and not find himself in  difficulty with the dogs which accompanied their masters to the service.

Church Music
Sir Archibald Grant, laird of Monymusk, who was the pioneer in progressive agriculture in his own day and did for Scotland what Lord Townsend  did for England, was also very interested in Church music.
In 1753 he brought Ensign Channon to Monymusk where he was appointed precentor in the Church.
Through the influence of Sir Archibald the repeating of the line in Psalm  singing was eliminated and Scottish church music had the beginning of its revival in this church. Choirs from Monymusk travelled throughout the north-east  of Scotland teaching local congregations this new form of church worship which was not universally approved of for some years.

John Wesley, the founder of Methodism, twice preached in the Church during his Scottish tours. In his Journal of 1766 he commented on the beauty of the Parish, the glory of the trees and the good singing. He was less impressed by the congregation, noting “I spoke exceedingly plain; yet the hearers did not appear to be any more affected than the stone walls.”